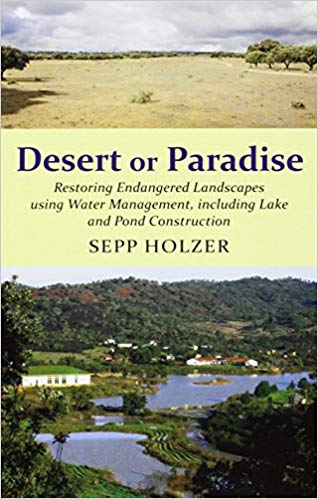 Sepp Holzer farms steep mountainsides in Austria 5,000 feet above sea level. His farm is an intricate network of terraces, raised beds, ponds, and waterways, well covered with productive fruit trees and other vegetation, in dramatic contrast to his neighbors' spruce monocultures. Fans of Sepp Holzer have come from all over the world to see the productivity of his farm, a veritable permaculture paradise. His first book, Sepp Holzer's Permaculture, offers a detailed guide to what Holzer has achieved on his farm. Many readers might have wondered-but how can we achieve this on a global scale? Luckily, his newest book, Desert or Paradise, examines Holzer's core philosophy for increasing food production, earth health, and reconnecting mankind with nature, applied to reforestation and water conservation across the world.

Through years of consultation with other countries, Holzer has developed a core philosophy for reconnecting mankind with nature even in arid or otherwise "lost-cause" regions. He details a process he calls "Grundierung," a term from painting meaning "base coat," which goes into great detail the importance of water, and Desert or Paradise offers his concept and guide to construction of large water reservoirs in arid, rainfall-dependent regions with examples from Greece, Turkey, Spain, and Portugal. Holzer describes the ecological and economic benefits of these changes, as well as the use of a variety of plant and animal species for further integration and regeneration of the surrounding areas, including reasons for reforestation and the cause and use of forest fires.

Holzer also outlines his ten points of sustainable self-reliance and how these methods can help feed the world, such as the need to regulate the water budget, eliminate factory livestock farming, bring more fallow or unused areas into production, enlarge crop areas by using terracing and Holzer-style raised beds, regionalize instead of globalize, fight for land reform and engage in community building, go back to the ancient farming wisdom, and change the educational system. Also included are Holzer's ideas on beekeeping, humane slaughtering, nature spirits, the loss of roots in our society in general, and in politics especially.